Lined by the Mediterranean Sea, the region Provence Côte d'Azur makes dream in many ways ! Beauty of its landscapes, quality of its lifestyle. Azure sky, natural landscapes and remarkable historical heritage, cicada song, perfume of lavender and villages perched with red roofs... Between sea and mountains, Mediterranean banks between Saint-Tropez and Menton, Provençal links in the alpine massifs of Mercantour, the set constitute a contrasted landscape. The beauty of its beaches and the luxury of its hotels, the reputation of its festivals and the celebrity of his artists give a harmonious balance with forests and green valleys of the high country mountains and the yellow of mimosas in flower … 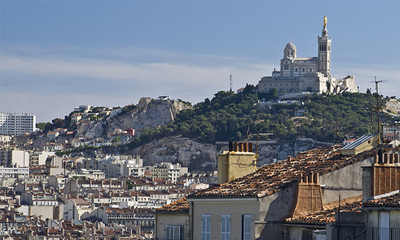 Marseille is the capital of Bouches du Rhône in Provence. It is an active, eventful city and above all rich with a great history because it is a port city, a mixture of civilizations. From the Basilica of Notre Dame de la Garde, known as "the Good Mother", you will dominate the famous creeks and the whole city, the Palais du Pharo, the Borely Park and especially the Vieux Port where a visit is essential with its brand new museum by the architect Ricciotti, Le MuCEM, Museum of European and Mediterranean Civilizations, the first major national museum dedicated to the civilizations of the Mediterranean.

Beyond, Marseille is connected to the City of Aix en Provence and the departure of visits not to be missed both cultural and leisure. Like the Abbaye du Thoronet, Abbey of Citeaux created in 1146, the Cistercian Abbey of Silvacane at La Roque d'Antheron where the famous piano festival takes place every summer with the greatest artists in the world and many other sites. ..

The Alpilles form an incredible massif of beauty. Some famous villages like Saint Remy de Provence, city of Nostradamus and Van Gogh, and its many  monuments. The village of Les Baux de Provence shares with you a millennial history. It is good to stroll there to discover many remarkable buildings including the castle perched above the medieval city, the museum of the painter Yves Brayer, the museum of santons, figurines of the Christmas celebrations, and the famous "Carrières de Lumières" which offers extraordinary digital exhibitions on great contemporary painters.

If you prefer nature with the Camargue and its wild horses... you will visit the unmissable Arles and its Roman arenas. The city sublimated by Van Gogh is today the mecca of photography and has seen the recent opening of the LUMA Foundation built by Franck Gehry.

A little higher, go to Nîmes, an important Roman city. Today it is a happy mixture of magnificent Roman remains and contemporary buildings. See also the famous Pont du Gard built by the Romans to supply the city with water. 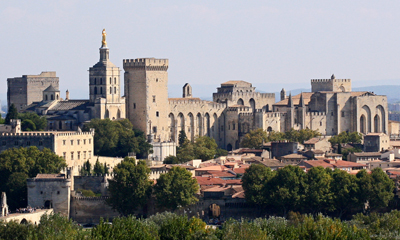 Avignon is famous by its Popes' Palace, seat of the papacy in the 14è and 15è century in "competition" with Rome. A masterful space which is also the main center of the festival which takes place there every year in summer. You can then discover Roman sites as Orange with the Gymnasium, the City, the Temple or the Capitol. Real front door in Vaucluse, this city preserved all its heritage.
The excavations of Vaison-la-Romaine are of an exceptional beauty, the city is built around old columns, and around porticoes, it counts antique streets, but also thermal establishments, theater and statues... The most interesting natural site is the Mount Ventoux peak, known by cyclists of the Tour de France, with beautiful strolls. On its base, find l'Isle-sur-la-Sorgue, Carpentras, Sorgue, the Gorges of Régalon, Provençal Colorado, and the Laces of Montmirail which open you the doors of Lubéron and his magic landscape.

Isle sur la Sorgue
In the past, Isle en Venaissin was originally a fishing town born from the waters of the river. Since ancient times, the waters of the Sorgue, abundant and regular, have provided the necessary driving force for crafts and industry. Paddlewheels had allowed the installation of wheat mills as early as the 12th century, then the creation of workshops to process wool and silk. The few picturesque wheels that remain today give L'Isle sur la Sorgue its special character only partially bear witness to the sixty-two that existed in the 19th century. and the intense activity that prevailed at the time: while silk brought new fortunes, L’Isle became the main wool center of the department. Visit the Brun de Vian Tiran factory.
Paradise for lovers of antics hunting, Isle sur la Sorgue is the largest center in Provence for the professional antique and second-hand market. A center on the scale of Europe, whose audience has continued to grow since the creation of the 1st Fair in the 1960s and the first antique dealer village in 1978. There are a little more than 300 to offer furniture, paintings, works of art, charming fabrics, jewelry, books, ironwork, in the different antique villages of the city from Friday afternoon to Monday evening inclusive, every Sunday find the Brocante Market avenue des 4 otages. There are more than 500 exhibitors at major events (International Fair for Flea Market and Antiquity - Easter and August 15). 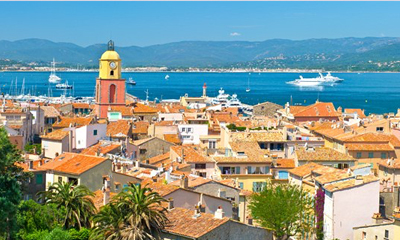 Saint-Tropez is the referent City in the world of tourism and show bizz ! With its 300 kilometers coast, the Var is the archetypal tourist destination. It is in this precise area that are the most beautiful beaches of the region, with a sand so fine as the dust. The nature is affectedly preserved, as les Îles d'Or : Porquerolles and Porcros,protected, a visit by boat is imperative.
Sea resorts, were born with a great reputation such as Sainte Maxime, Bandol, Le Lavandou, Saint-Cyr or still Saint Raphaël. Following beaches, pine forests, undergrowth, calanques and the wild creeks, you will always benefit from an outstanding panorama, on the bank rocks caressed delicately by the sea. To see also the lakeside cities, as Port-Grimaud and Cogolin. Green hills, cultivated plains, pine forests in the mesmerizing scents, it is here that rosé wines " Côtes de Provence " or still "Bandol" are produced, on 37 000 hectares vineyards... Without forgetting that it is also the region of flowers, fruits and olive. 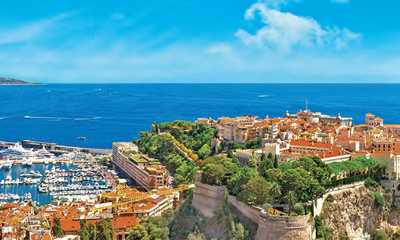 Capital of the Alpes-Maritimes, Nice and its Belle Epoque buildings have so many treasures to be admired. The valley of the Merveilles, Auguste's Trophy, the baroque architecture, the Cimiez arenas, etc... it is in the Var, with its patronymic wealth, that you can admire these splendid monuments. The Fort Carré in Antibes, is a part major 12 buildings. Defensive building, it was also an immense tower built in 1550. The villa Greek Kerylos in Beaulieu-sur-Mer, the Abbey of Lerins, on the Saint-Honorat Island, in front of Cannes, in the architecture of the XIth century of this Monks refuge.
Concerning chapel, do not miss the chapel Notre-Dame des Fontaines in La Brigue, more known under the name of " Chapel Sixtine of the Alps of the South " and the Chapel of Vallauris Castle painted by Picasso. In the same line, the sanctuary of Notre-Dame-de-Laghet ( The Trinity), the Russian orthodox cathedral Saint Nicolas (Nice), the Citadel Saint-Elme and the Saint Pierre Chapel painted by Jean Cocteau (Villefranche sur-Mer ); the villa and the gardens Ephrussi de Rothschild... Farther, Grasse, the city of perfume or Biot and her famous factory of blown glass. Numerous painters lived there, we find a large number of paintings in museums as famous Fondation Maeght in Saint-Paul de Vence...
Every city, Nice, Mandelieu, Juan les Pins ... organizes during summer a festival of music, jazz or other one as Cannes and its famous film festival...