Although Le Touquet has for a long time been referred to as "Paris-Plage", this epithet seems hardly appropriate to its golf course, which is one of the most highly reputed in the Côte d'Opale. Created at the turn of the century, like its counterparts along the coast, it was initially intended for a rich, English clientele from across the Channel. The "La Forêt" course first opened in 1904 and "La Mer" in 1929. It is on this latter course that English players are likely to feel most at home: the fairways unfold amongst majestic dunes and at times even encroach upon their slopes to afford a view of the sea. What superb links! Deviating away from the fairways is out of the question: the rough quickly gives way to a hostile zone composed of copses and thick undergrowth that battle with the sand for a place in the sun. Add to this the bunkers—ever-present on the approaches to the greens, and the wind,  of course, which, from one day to the next, modifies the parameters of play, completely negating the perception of the course derived from an initial experience.  No, it is not easy to tame this course, which has entertained some of the world's greatest players, from Sam Torrence, the current record-holder of the course (63 at the French open in 1976), to a budding golfer called Tiger Woods! One can thus be forgiven for preferring its "ancestor", "La Forêt", which celebrated its centenary in 2004! Tucked away amongst pine trees and less subject to the vagaries of the wind, it does not offer the same challenge and better accommodates the average player. But one quickly discovers that off-centre strokes are little tolerated! Thus accuracy is required, but this is not always easy to reconcile with the need for power, which is sometimes indispensable to clear trees or an immense natural bunker.
Le Touquet also offers a 9-hole course, "Le Manoir", which is considered to be less "stressing"—on account of its wide, generally flat fairways—and ideal for "getting one's hand in".
Le Touquet Golf club has a new club-house inaugurated in august 2016, splendid ! 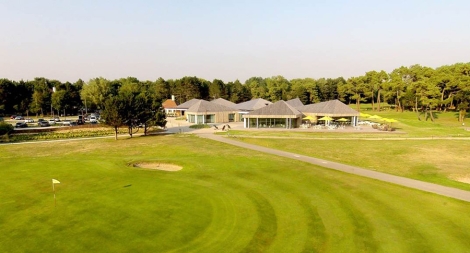 Around of Golf du Touquet